The GTC New Play Initiative Goes National as the

The GTC New Play Initiative has expanded to become a national program called the Moss Hart and Kitty Carlisle Hart New Play Initiative. Click here to go to the HartNPI.org website including information on the Hart NPI’s first cycle of plays. Below is some information on two of our past GTC NPI projects. Eternal Equinox was an NPI Production winner which went on to an Off-Broadway run at The 59E59 Theaters. Bobby & Matt: Passing Notes Through Life was an NPI Special Event and was produced in NY at The Players Theatre.

“Engrossing . . . A tense triangle of attraction and jealousy”
The New York Times
“A fascinating journey . . . a sterling cast . . . a tantalizing glimpse into that distant world.”
nytheatre.com
“A delicious look at love, jealousy and commitment . . . Eternal Equinox takes this triangle, and explores it in fascinating and unexpected ways.”
Reviews Off Broadway
“High-toned, steamy drama . . . Leonard Ogden’s wonderfully detailed set . . . skilled, steamy work by Pedersen, McCarthy and Goodfriend”
New York Post
“Provocative, grown-up entertainment . . . Dialogue is smart, scintillating, bitter and character specific . . . An articulate play about relationship trade-offs . . . Leonard Ogden’s Set Design is an eloquent cottage of artistic dishabille. Costumes by Tracy Christensen are perfectly conceived”
Womanaroundtown
“We truly feel the emotional, compelling nature of these characters . . . An interesting web of British bohemian intellectual lifestyles . . . sharp quick-witted tongues moving sleekly”
NY Theater Examiner
“First-Rate . . . An intriguing trio, if there ever was one”
GALO Magazine
“Riveting Theater . . . a smart look at history and interpersonal relationships that leaves the viewer with plenty to think about after the performance”
One Stop Curiosity Shop
“Seductive and alluring . . . a juicy soap opera . . . Kevin Cochran’s direction is solid . . . The set design by Leonard Ogden is gorgeous”
theateronline.com
(pictured are Christian Pedersen, Hollis McCarthy and Michael Gabriel Goodfriend) 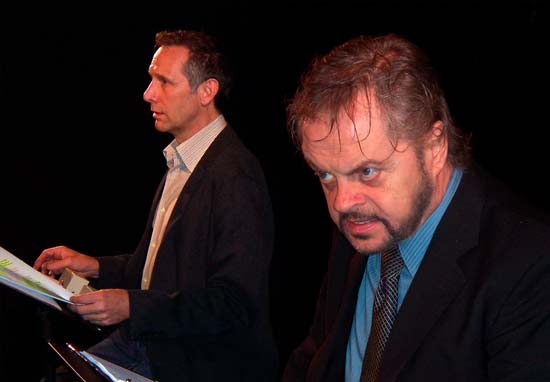 “Bobby & Matt, Passing Notes Through Life” premiered at GTC Burbank as a Special Event of the New Play Initiative and then had a very successful run at The Players Theater in NYC as part of the New York International Fringe Festival.

Back Stage New York named it a Pick of the Week and went on to say:

“As moving as it is funny, complex yet truthful in its simplicity and directed with keen insight by Cochran, the show is an absolute gem . . . writer Kevin Cochran has given us a gay Love Letters. And here’s hoping that it gets produced just as often and as widely as A.R.Gurney’s classic two-hander . . . But thanks to Cochran’s specificity and sharp eye for detail, Bobby & Matt has an appeal that goes much wider than the gay community. This vibrant portrait of a changing America may be about two gay men, but audience members are bound to recognize themselves in the rich history and humanity of this wonderful tale.”

Martin Denton of NYTheatre.com wrote: “There are several gay-themed shows in FringeNYC, as usual, and the one I enjoyed so far is Kevin Cochran’s “Bobby and Matt” — the earnestness and importance of the issues presented here makes it worth our attention.”

Bobby & Matt was a Critics Pick at BroadwayStars.com and named one of the “Ten Most Promising FringeNYC plays” Chelsea Now, The Villager and Gay City and a “Hot Queer Pick” by Edge New York and Edge Fire Island.

And Theasy.com named it “A Best Bet” and called it “An incredibly beautiful and well-done new play . . . This is more than a gay play or simply an oral history of the gay American experience.This endearing and often times heart wrenching tale is about the beauty of the human experience and the ability of a friendship to survive and persevere against all obstacles.”

(pictured above are Stephen Hope and Gary Marachek).